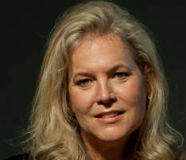 Kim’s more than 30 years as a business leader and entrepreneur started in the Executive Training/Buying Departments of Jordan Marsh and Macy’s. She founded Teapots & Tassels, Co., which was awarded “Best of Rhode Island” repeatedly, and was featured in Southern Home Magazine. Kim has founded and led several significant community based programs, including the Barrington Business Task Force, and was awarded “Entrepreneur of the Year” award by the SBA in 1991 and “Citizen of the Year Award” in 2005 by the East Bay Chamber of Commerce. She founded and chairs Flower Power, a community beautification effort in Barrington, and has raised close to half million dollars in twelve years for this endowed effort. In 2009 Kim and her daughter, Ava, founded Ava Anderson Non Toxic, a direct sales company offering the safest full line of 90+ organic and natural personal care and home cleaning products, whose singular purpose was to reduce harmful chemicals linked to disease for humans and the environment. In 7 years she and her daughter built the company to a $60M run rate, with 100 local employees, and 20,000 enrolled Independent Consultants across the country. The Andersons sold the business in 2016, and Kim is now dedicated to working with her family to impact invest for climate crisis solutions.