A lot is happening for middle school students on wrestling mats across Providence these days, and it’s all due to Beat the Streets Providence. Since its founding in 2013, Beat the Streets has brought more than 1,000 local public school students into the sport of wrestling through afterschool programming. Their mission is to inspire urban youth to succeed in school and life. With their co-educational wrestling program as a main attraction, they create a positive environment that includes academic support, strong mentorship, healthy physical activity, nutrition and wellness education, and incentives to attend and do well in school.

Beat the Streets Providence got underway thanks to partnerships the organization formed with the school district and with community partners such as the Providence After School Alliance. Young people started showing up right away, and they’re still coming. So far, Beat the Streets Providence has expanded to six middle schools, three high schools, two YMCA centers, and three community recreation centers. They get hundreds of Providence students engaged every year, and in 2018 they launched a girls wrestling team.

“I think the impact that we are having on these kids is unmeasurable. The fact that we can ask a hundred middle school kids in Providence to show up somewhere at six in the morning and they’re there early tells you that we’re doing something right.”

Richard Muniz, who is currently executive director for Beat the Streets Providence, started working for the organization as a volunteer coach in 2013 while he was a student at Brown University. The organization’s founder, Billy Watterson, was a fellow Brown student and wrestling teammate who saw the potential for using sports to pull young people back to school, and by doing that to reestablish public schools as community hubs. He wanted to use afterschool sports as a catalyst for expanding the role of schools in children’s lives. 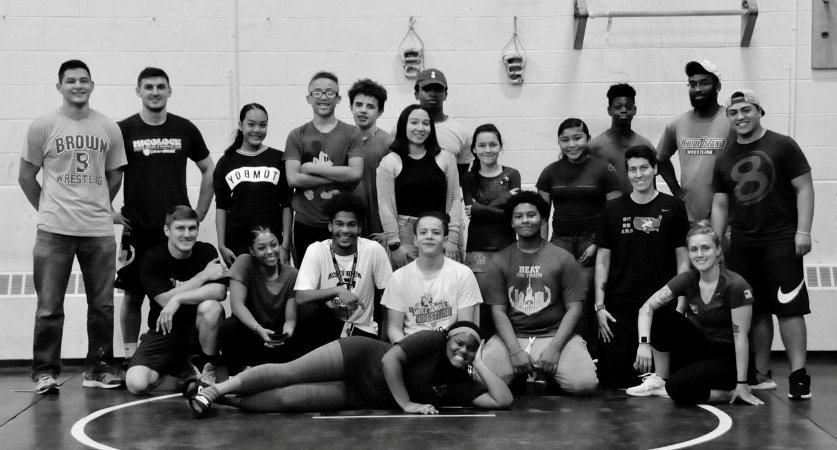 “Our mission is basically to reintegrate sports into schools, starting with wrestling because that’s what we know,” says Richard. “But Billy’s larger vision as founder was to see the return of equality across districts with regards to what is offered in schools. In Providence you can really see the divergence between the public, charter, and private schools in what is offered for students. We are trying to steer the reverse of that, tackling the social injustices that are going on and providing resources that might pull students who don’t like school back in.”

After running their programs for a couple of years, and with a lot of experience under their belt, Beat the Streets Providence applied and was accepted to SEG’s 2016 Impact Accelerator. They were recommended for the Accelerator by Alan Harlam, who had founded Brown University’s Social Innovation Initiative.

“We were college students working as volunteers out of our dorms,” says Richard. “For Billy as the founder, the professionalism of being an SEG Accelerator member was game changing. For early nonprofits, it’s hard for people to take you seriously when you are really grassroots. But having a location, a professional-looking place where you can hold meetings, really did help sell our idea not only to donors but also to people from the community we needed to connect with.”

The Impact Accelerator’s business-intensive curriculum and guidance from SEG’s circle of skills-based volunteers were also vital to bringing Beat the Streets Providence to the next level. “As a group of athletes, we thought we could just go and produce results,” says Richard. “But we didn’t understand the way we should be accounting for those results, both quantitatively and qualitatively.”

“Coming to SEG provided us with a framework, a path, a scaffold to build the organization that can then be removed and you’re left with a standing building that has a solid foundation.”

According to Richard, the SEG Impact Accelerator gave Billy a different way of thinking. “He transitioned from day to day programming to a more holistic view of what the organization needed to do to become sustainable,” says Richard. “It pushed him to see we needed to increase staffing, so success was not solely based on one person’s availability to do the job.” Soon Billy was focusing more on grant writing, donor relations, and the upper-level management of Beat the Streets Providence while Richard took on the day-to-day details. “What came towards me was the practices, the one-on-one interactions with the kids, the complete engagement and immersion in the program itself that he had to step away from,” Richard adds.

Refocusing was the right move. In the fall of 2016, after the SEG Accelerator, Beat the Streets Providence doubled the number of schools it was working with, increasing both the number of programs and participating students. The organization still relies on a host of passionate volunteer coaches, but also now has paid staff members, including Richard, named executive director in 2018, Silas Murray as director of wrestling and mentoring, and Jacque Davis as director of women’s programming. (Billy, who retains his standing as founder, now works for a philanthropy in New York City.) Budget support comes from a well-balanced mix of individual donations and grants. Programming keeps growing and now follows students as they enter high school and college. In 2020, Beat the Streets Providence hosted their third annual girls statewide invitational wrestling meet, held at the RI Convention Center.

For Richard, the takeaway from the SEG Impact Accelerator is about organizational maturity. “I think it comes back to what you really need to do to create an organization,” he says. “People can misstep because they don’t have the advisors or the community or the collaboration required from other people going through those steps. Coming to SEG provided us with a framework, a path, a scaffold to build the organization that can then be removed and you’re left with a standing building that has a solid foundation. The scaffold helps provide stability at a time of instability and enables you to get your footing settled and organize what you’re doing.”

Now in its seventh year, Beat the Streets Providence has established a legacy of success and is making a difference for young men and women in the city. “I think the impact that we are having on these kids is unmeasurable,” says Richard. “You really have to interact with them to see it. The social growth that they experience while being a part of the program is our greatest achievement. The fact that we can ask a hundred middle school kids in Providence to show up somewhere at six in the morning and they’re there early tells you that we’re doing something right.”