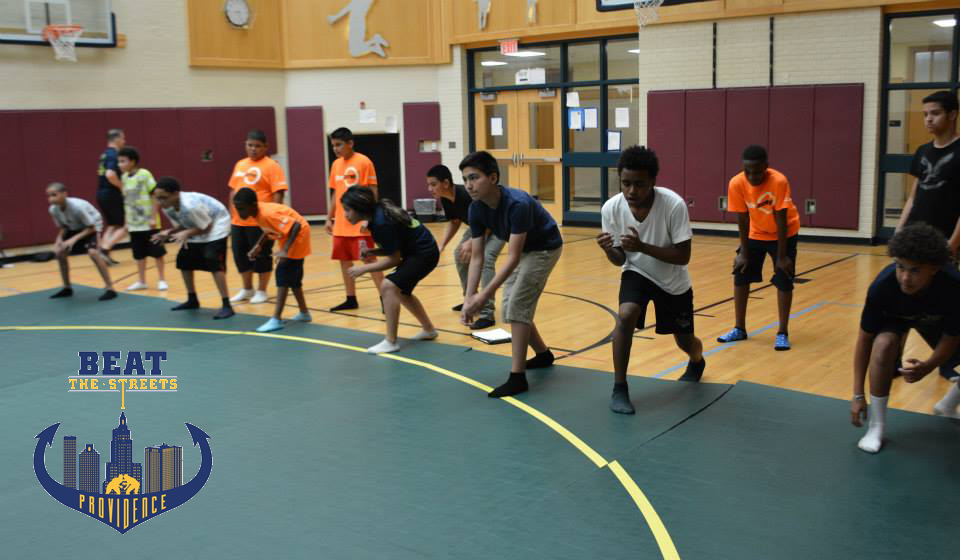 You would expect a public middle school gym to be empty during the summer – especially in Providence. Kids taking advantage of the three months of free time are doubly inclined to be outside during the limited period of nice weather. This summer Tuesday night, however, is bustling with kids. Young boys and a few girls huddle around a blue mat. They’re sweaty – the gym has no air conditioning – and their eyes are bright and alert as they listen to a sandy-haired 20-something in a white Cornell t-shirt and red shorts tell them to square their shoulders and stand in a strong stance to gain an edge against competitors.

This is Beat the Streets summer series at Urban Collaborative Acceleration Program School (UCAP) in Providence. The coach is Brian Realbuto, the 2014 NCAA Wrestling Finalist from Cornell University. Brian came from New York to teach these local kids new techniques and skills that will accelerate their wrestling careers during the school year.

This clinic is unique. For most of these kids, it’s their first time to be trained by a high-caliber nationally-ranked athlete- and they don’t have to pay a dime. Beat the Streets doesn’t charge kids for its program. The revenue model for the organization is about 50% individual donations and the rest is fundraisers or grants.

This is Brian’s first time teaching a clinic for Beat the Streets Providence, but he’s hooked. Like other coaches, Brian can immediately see the impact he’s having on these kids lives. As he says,“ Wrestling is a unique sport in that it really allows kids to build character and there is a lot of team camaraderie and they really become a family after going through a practice together. You understand the difficulty everyone is going through in a practice and after, you know you all can make it and you all can do anything.”

Beat the Streets is filling a void in public school programming. Over the past decade, middle school sports have been entirely removed and reduced at the high school level in Providence and Rhode Island. In the middle schools, one third of students are chronically absent and 5,300 incidents of suspension occur each year.

Kids are not succeeding at the level they should be, and bringing sports programs back may just be the solution.

Public schools across the nation struggle with budget cuts and often choose to eliminate sports programs to save money. The results are shocking. Students who do not play sports or participate in after school activities are 57% more likely to dropout. Sport program cuts contribute to an increase in problems with obesity, violence, and academic failure.

Billy saw the problem first hand after he volunteered with Junior Achievement at Gilbert Stuart Middle school. Billy listened to students aspirations and was disheartened by what he heard, he explains, “Across the board kids said, ‘I want to work at the grocery store, or the mall, or the gas station’ and there is something deeply wrong there.”

When Billy was in middle school, wrestling was an outlet that provided him with mentors, support, and self-confidence. He says,“ I didn’t have much belief in myself that I could do anything, then I started wrestling. When you improve in wrestling you see results immediately, and because of that I believe that if I work hard in anything I can do well and succeed.”

If wrestling could do that for him, why not for urban youth in Providence? Billy started the nonprofit organization to provide after school wrestling programs  to inspire Providence youth and give them the tools they need to succeed. Students participate in mandatory homework help for at least forty-five minutes up to four times a week, work closely with a mentor throughout the year, and must attend school in order to wrestle.

A crucial part of the program’s success is to find passionate and experienced coaches. Billy explains, “The biggest difference our program can make is when coaches develop relationships with kids. When a kid really starts to trust a coach they have an incredible power to influence the decisions that a student is making.” 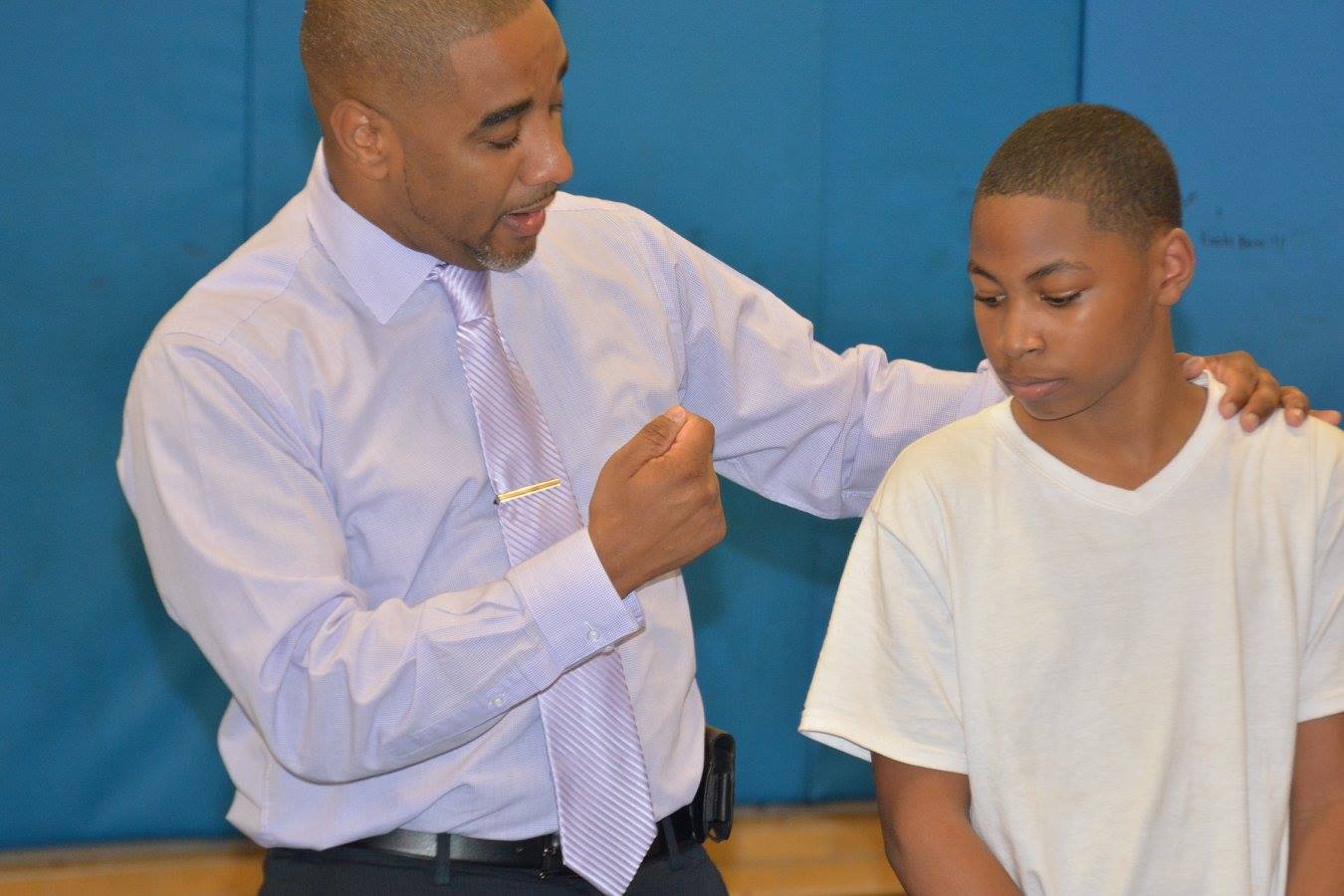 Beat the Streets also develops the next generation of influential coaches. Junior coaches are students who previously participated in the program and are able to come back and receive volunteer hours or a paid summer job for coaching. Billy says, “It’s a really empowering experience for them to come back and coach at their middle school, and for our students, to have someone that relatable who has recently been in their position, it can really be a virtuous cycle.”

One student involved in the program says, “You can come have fun, wrestle, meet new friends, and the coaches are just some of the best people you can meet.” For another student it’s about reaching new goals, the student says, “I want to continue wrestling in high school and through college because I am going to go to college.” Determination and discipline is another benefit of the program as a participant explains, “I am just going to keep on practicing and practicing and even if they have a cut that’s not going to bother me, I am still going to practice, it means a lot to me.” 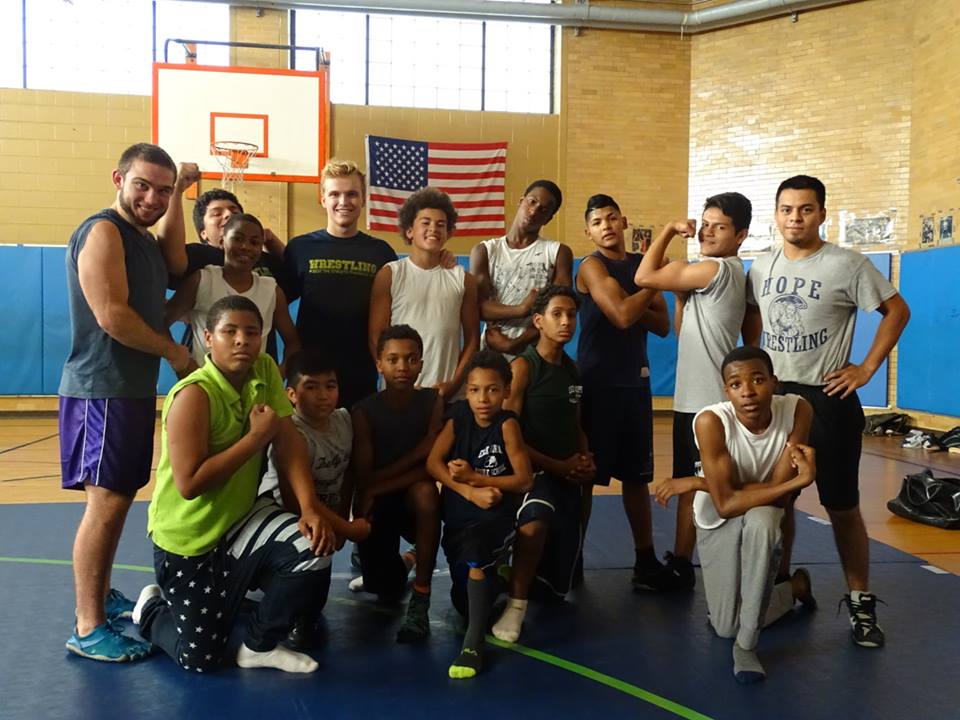 Billy is able to work full time on the organization for a year through Brown’s Embark Fellowship. In order to grow Beat the Streets, he needed a great space to work in. Billy heard the Social Enterprise Greenhouse offered Hub Scholarships for their co-working space and jumped at the opportunity, he says,  “The space has been pretty fantastic, everyone has been really helpful here.”

For Billy, he wants Beat the Streets to be the vehicle for change in Providence schools, he says, “If Providence announced today that they were going to bring back all school sports, nothing would make me happier.” The long term outlook for Beat the Streets includes an accredited coach-training program, incorporating a national organization to provide oversights, and empowering students across the country to succeed in school.