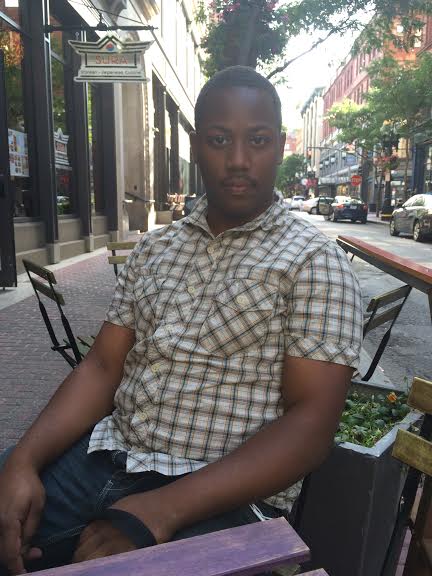 “I want Providence to know that Food4Good truck is not mine, it’s theirs! It’s the community’s. It’s for Providence.”

A Providence social entrepreneur and graduate of Social Enterprise Greenhouse’s Incubator (now known as SEG 101 Workshops) program, Julius Searight recently participated in Food Network’s The Great Food Truck Race with fellow Johnston & Whales University (JWU) alums, Burto Franco and Keese Chess. Although the Gourmet Graduates left the race without their truck, Julius’ dream of a ‘mobile soup kitchen’ has never seemed more real. Rhode Island’s first social enterprise food truck, Food4Good, will have the workings of a traditional food truck, but act as a part-time mobile soup kitchen. Once operational, Julius will use profits from sales to cover the cost of 400 meals that will be handed to Providence’s low-income neighborhoods weekly.

Julius spent most of his early childhood living in foster homes. It was not until he was adopted by his parents that he became very involved with nonprofit organizations. From his first job working at John Hope Settlement House mentoring the youth, to serving as an AmeriCorps VISTA at Crossroads of Rhode Island, Julius expressed his desire to give back to the community in everything that he did. During his years at JWU, he became more involved working in soup kitchens and it was in his daily services that he expressed, “Every single day people just came in to get help, services, and food. They just need a little to make their lives a bit easier.” He shares a particular instance,

“There’s a certain story that I tell often. I was talking to a kid and his family. He had told me that he had to hold over dinner until he ate at school the next day because his mom is waiting on her paycheck so she can buy groceries. I’m sure that’s the issue in many homes in Providence and in the United States.”

He described these stories as a reminder of what his biological mother had to go through during her times of struggles.

As a recent JWU alum, Julius was very firm about not wanting to work in a restaurant type setting. He wanted to combine the skills he has gained with what he believes is the biggest issue faced by our community — hunger. He wanted to create a business that gives back to others in need. That is when the idea for Food4Good started to develop:

Julius could not have not said it any better.

The intersection of innovative business modeling and positive social change is making great strides in Providence, which is already home to incredible social enterprise food products such as Providence Granola, Glee Gum, and Harvest Kitchen and restaurants like AS220, Abysinnia, and Friendship Cafe. Julius’ Food4Good truck, the first of its kind, will be a great addition to the Providence family!

One more thing… In order for Food4Good to be fully operational, Julius needs to raise $15,000 to equip the truck with a professional kitchen. For more information visit, http://food4goodri.org/

Back to Ecosystem Blog

Paula is a passionate social justice advocate. Her commitment to social enterprise stems from her undergrad years at College of the Holy Cross, which fostered a passion for social impact and love of the arts. She graduated with a degree in sociology, peace and conflict studies, and visual arts. Realizing her passion to take the theories from her studies into a more practiced reality, Paula found herself involved with service programs from Kentucky to Jamaica and back. Born in the Philippines, but raised in Rhode Island, Paula Cunanan is proud to be back in Little Rhody and is excited to begin a new chapter of her life as Social Enterprise Greenhouse’s Later Stage Portfolio Manager. Her love for travelling led her to study in Beijing, China, but in her down time Paula is either in the kitchen baking, taking photographs during one of her nature walks, or doodling on a sketchbook.