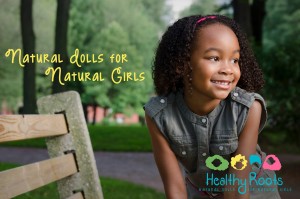 In 1947, a study by African-American psychologists Kenneth and Mamie Clark showed that children at a very young age exhibit racism. The Clark Doll Study shockingly revealed that children preferred white dolls over black regardless of their own race and skin color. In 1987, Hofstra University conducted the same study, children still preferred white dolls over black. In 2015, the doll market is still predominantly filled with white dolls, even though 43% of the United States population is made up of racial and ethnic minorities.

The few black dolls that do exist are often expensive or unrealistically represent women of colour. “Black Barbies” are often seen as white dolls simply tinted brown. There is more diversity than skin color- facial features and hair texture all differ from person to person across ethnic groups. Doll homogeneity decreases children’s  self esteem provoking the idea that they are not important enough to have a doll.

Yelitsa Jean Charles, a current Rhode Island School of Design (RISD) student, wants children of color to love their healthy roots. She started a doll company to combat internalized racism and colorism called Healthy Roots, resulting from the lack of diversity in children’s playthings. The company represents the girls who aren’t being represented by bringing diversity to the toy aisle and broadening the standard of beauty to include all girls. From facial features, to hair, to unique personalities, Healthy Roots dolls embody the next generation of young girls.

Meet Marinda, Zoë, Gaïana and Dara. Marinda is an Afro-Brazilian doll, she’s very athletic, and loves to play soccer. Zoë is African American. She’s a thinker who is ready to win any academic argument. Gaiana is Haitian, music is her passion. Dara is Nigerian and a total techie. All four dolls are 18 inches tall and come with their own hair care booklet. Girls of color often use harsh and dangerous chemicals on their skin and hair because they don’t know how to properly care for their own hair. In order to appeal to mainstream beauty standards, they often neglect to embrace their own unique beauty- Healthy Roots teaches girls implicitly from a very young age to love their own  natural beauty. The hair care book teaches young girls proper hair care that they can practice on the dolls who have hair just like them. Yelitsa calls the dolls, “The American Girl Dolls of natural hair.” 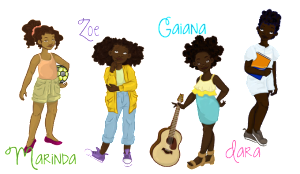 The idea for Healthy Roots came from Yelitsa’s own experience with Barbie dolls as a child. She remembers, “Whenever I looked at Barbies dolls I thought, these don’t look like me. That’s not fair.Toys are learning tools. Toys impact children. If you don’t have a doll out there that looks like you, how does that make you feel about yourself?”

Yelitsa wants the Healthy Roots dolls to represent much more than just beauty, she says, “With the Healthy Roots dolls we thought about all the other great things girls have like intelligence and great personalities. Our dolls aren’t gender neutral yet, but we don’t want to enforce gender stereotypes. Our goal is to go beyond the fashion doll by creating characters that engage in different interests and career opportunities that many girls do not consider. Computer science, engineering, biology. These are things girls should love to do too!”

Through RISD, Yelitsa realized she could use her passion for art as activism. She explains, “Artists in a lot of ways contribute to the problems society is facing because we don’t bring diversity into our work or talk about the social issues- but why? So, as an illustration major who works in children’s media, I wanted to make sure that I brought positive representation and diversity into my work.”

During a 3D Illustration class at RISD, Yelitsa was asked to redesign a fairy tale character. She chose to remake the classic fairy tale princess Rapunzel into a doll. She explains, “I wanted to redefine the standard of beauty for women of color with this Rapunzel doll who is often depicted as a white woman with long blond hair whose beauty is so valued. Black women don’t have that. They are often told, ‘Your hair or skin isn’t beautiful because it’s dark.’ So I made this beautiful brown doll and thought, ‘this could be something.’”

The idea flourished, and Yelitsa participated in the RISD Entrepreneurship Program. This summer she participated in the first cohort of the Brown B-Lab Incubator Program and became a Brown University Social Innovation Fellow through the Swearer Center. Healthy Roots is currently participating in MassChallenge and has grown to a team of six students. Things are moving fast.

Yelitsa’s biggest dream is to put Healthy Roots dolls on every toy shelf and make them accessible for every girl. Entrepreneurship is something that comes naturally to Yelitsa. She says, “For me, being an entrepreneur isn’t about the money, it’s the fact that I am changing people’s lives by inspiring young girls. Entrepreneurship is about finding solutions to your problems and being crafty and resourceful.”

The next steps for Healthy Roots include establishing a relationship with a natural hair care company and continuing to grow and progress the doll product line. Stay up to date on all things Healthy Roots by checking out their website and Facebook.