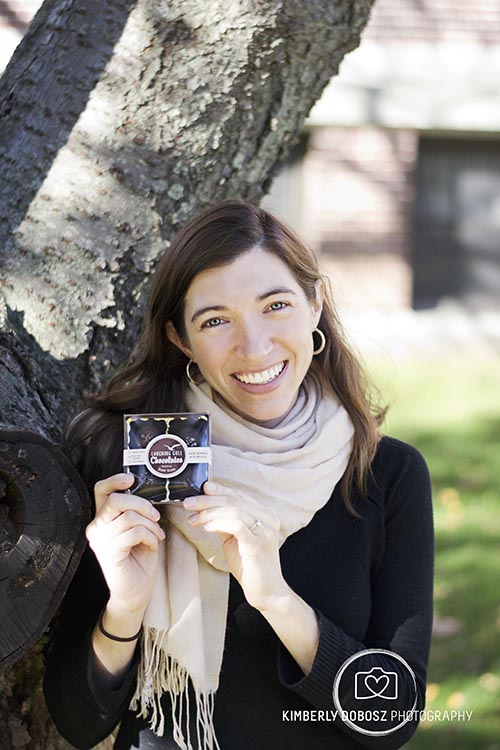 As Lindsay Tarnoff prepared to graduate from Skidmore College, she was faced with the unavoidable question of what she was going to do after college, unsure what to answer she started saying she was going to save the world with chocolate. Nine years later Tarnoff’s dream became a reality when she founded Laughing Gull Chocolates in Providence, RI.

Although Laughing Gull Chocolates as it now exists is still young, the impetus for the venture had long been growing in the back of Tarnoff’s mind. A Government and Spanish Studies major with a minor in Latin American studies, Tarnoff wrote her capstone project on the history of the morality of chocolate. Tarnoff also spent time in Mexico, where she studied and witnessed first hand the effects of the North American Free Trade Agreement (NAFTA). Tarnoff was impacted by the stories of the families she spoke to and their experience with NAFTA, “I talked to families whose daughters had disappeared; who, in a roundabout way, had been the victims of drug wars and violence and that was an indirect result of free trade.” Tarnoff’s return to the United States coincided with the rise in the fair-trade coffee movement, and her experience in Mexico, combined with the success of fair-trade coffee at home, set her to wondering about the potential for other fair-trade products.

The concept of Laughing Gull Chocolate began with fair-trade chocolate, but today Tarnoff has gone one step further by using direct-trade chocolate. Tarnoff explains that while “fair trade gives the farmers a fair living wage, direct trade cuts out the middle-men so that one company has a direct relationship with the farm. They say not only do you need to pay a fair living wage, but they also endorse sustainable agriculture practices and can list out certain additional demands.” Tarnoff herself doesn’t speak to the farmers, but the company she buys her chocolate from — Taza Chocolate — does. Tarnoff’s goal is to establish a personal relationship with the chocolate farmers in the Dominican Republic, Belize, Haiti, Bolivia and Guatemala who help make Laughing Gull Chocolate a reality.

Although Tarnoff’s dedication to direct trade chocolate is in and of itself a positive impact, Laughing Gull Chocolate’s dedication to positive change also strikes close to home. Tarnoff hopes to use her venture as an educational opportunity on everything from “teaching people where chocolate comes from, to ways of trade, to teaching kids chemistry through chocolate.” It’s this type of educational opportunity that Tarnoff hopes to provide when she has her own “brick and mortar place” for Laughing Gull Chocolates. Tarnoff envisions a Laughing Gull Chocolate shop as “a place to bring people together to sit and read or just do work. A place to have workshops and host speakers. I hope to be a staple in the community.”

Currently Laughing Gull Chocolates is based out of Hope and Main’s kitchen, where Tarnoff produces chocolate on a weekly basis. It’s also through Hope and Main that Tarnoff heard of the SEG Food Accelerator program; Laughing Gull Chocolates is currently one of twelve food ventures working with SEG to develop and further their missions. Although she’s still early in the program, Tarnoff explains that it is “already helping me to think more strategically about the business as a business rather than only as ‘I love chocolate and want to do good through chocolate.’”

Tarnoff’s commitment to her mission is unwavering, but Laughing Gull Chocolate is ultimately about manifesting a mission to do good through chocolate and, more specifically, ganache filled truffles. Tarnoff offers four staple flavors — plain dark chocolate, coffee, salted caramel, and raspberry — as well as seasonal flavors such as blackberry sage, pomegranate honey, and lemon ginger. Laughing Gull Chocolate’s mission clearly tastes good, “I am beyond my capacity, which is a good problem to have,” says Tarnoff, “And I hear people talking about Laughing Gull Chocolate and how it’s delicious chocolate; people who wouldn’t even necessarily know that I’m associated with the venture will mention it to me.”