“He’s more the doer and I’m more the thinker,” explains Nathalie Alberto in reference to her brother Alan Alberto, “We balance each other out by bringing different strengths to the table and challenging one another positively to grow.” The Alberto’s biweekly sessions with the Social Enterprise Greenhouse Food Accelerator Program has them thinking about how they work as a team. And given the successful start of their food venture, Mesa Fresca, a few months ago, it seems that Alan and Nathalie have struck just the right combination of thought and action.

Mesa Fresca, which means “fresh table” in Spanish, is dedicated to delivering premium quality Hispanic products. As of now, Mesa Fresca specializes in chimichurri, a traditional Argentine marinade made of parsley and garlic, traditionally served with meats at “asados” (essentially a barbecue). The inspiration for Mesa Fresca came from Nathalie’s and Alan’s Argentine roots. The children of two Argentines, the Alberto’s grew up eating foods from their parents’ homeland in Miami where their mother would make her famous chimichurri. Whenever they had dinners on the weekend, guests would ask to bring home the jar of homemade chimichurri that their mother, Ana Maria, had prepared. At the urging of friends and family, Nathalie and her mother started making extra jars of chimichurri and selling it.  When Alan, who’s a professional ballet dancer, moved back to the United States from abroad he suggested they take their home-based chimichurri enterprise to “the next level.” In 2014, Nathalie and Alan made a stop at the Cape Cod Chip Factory for inspiration. Discussing what was important to them — “fresh food and family; people gathering together and being nourished by food and community” — they came up with the name Mesa Fresca; that same year Alan incorporated the company in Rhode Island. 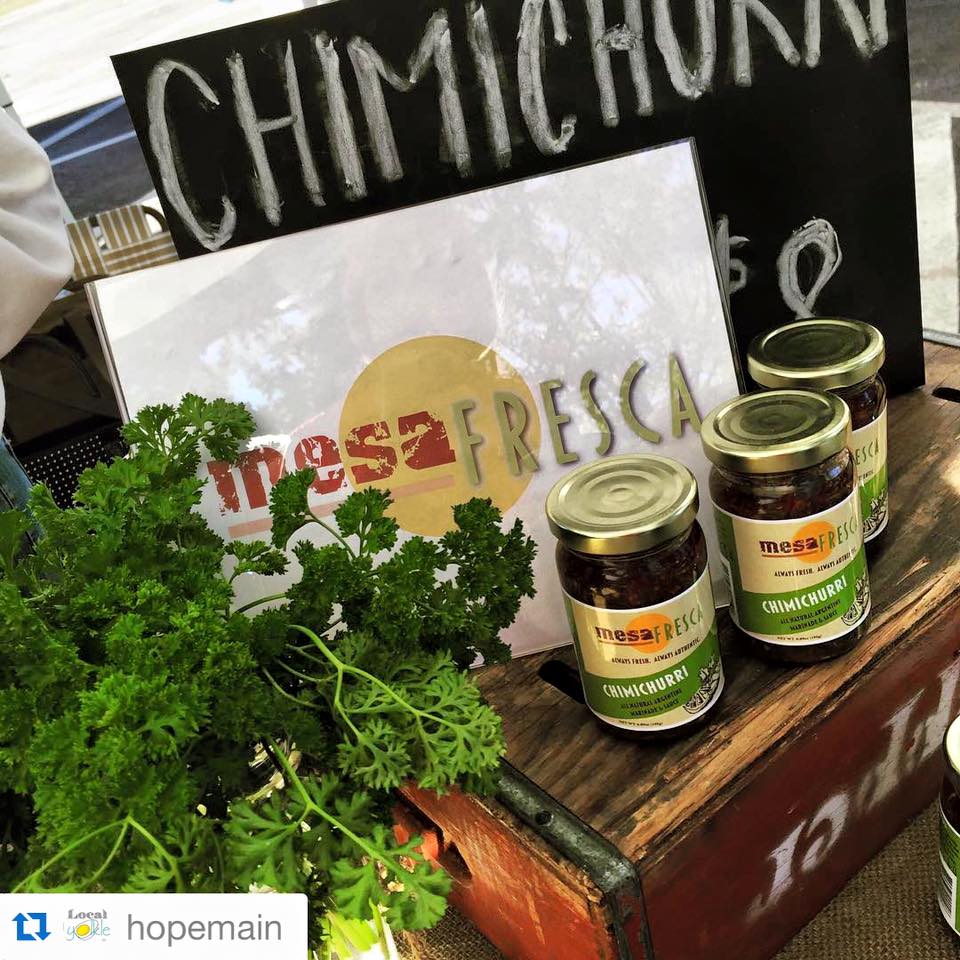 Beyond looking to meet the high demand for their family’s chimichurri recipe, Alan and Nathalie saw a gap in the market that their venture could fill: a lack of fresh, premium Latin food products. Alan explains that while he and Nathalie grew up “eating very healthy and fresh Hispanic foods,” these foods are not easily accessible, “you had to make them from scratch.” Mesa Fresca’s chimichurri is small-batch, handmade using locally-sourced ingredients when possible and sustainable production practices. Furthermore, as a family owned business, the Alberto’s hope to source their ingredients not only locally but from family-owned farms in order to contribute to the “family-owned cycle of operation.” Eventually, as they grow, they hope to provide employment and educational opportunities to underprivileged communities. “Once we’re profitable at scale we want to be able to give back a certain percentage of profits and contribute to underprivileged communities who don’t have enough fresh food, to enter those communities and educate them,” explains Alan.

Given the impulse to do good behind Mesa Fresca, it’s no surprise that the Alberto’s found themselves in the first cohort of food ventures in SEG’s recently launched food accelerator program. Alan learned about the program through Hope & Main, where the siblings currently produce their chimichurri, and after discussing the opportunity with Nathalie (who still lives in Miami but is in Providence for the duration of the program) they agreed that it sounded “right up our alley” and decided to apply.

Since starting the program in February, Mesa Fresca has already reached new milestones. Dave’s Marketplace in East Greenwich and Smithfield just started carrying the chimichurri, which is also available at local farmer’s markets and specialty stores around the state. On the first day of tastings at Dave’s Marketplace, the Alberto’s sold out of the 60 jars they had set aside for the weekend. With one more day to go, Nathalie and Alan found themselves in Hope & Main’s kitchens overnight. “We cooked until one in the morning,” says Alan with a smile, “so that we could be back on Sunday with extra jars.”

Mesa Fresca began operating in July 2015, and since then has been through eight production cycles. But, as its success at Dave’s Marketplace suggests, Mesa Fresca is looking at increasing its production; “Up until now we’ve been going into the kitchen once a month,” says Alan, “Now we’re going in once a week.” Alan and Nathalie are taking their growth in stride, while still remaining wedded first and foremost to delivering a quality, premium product. The biggest key to their success so far, explains Nathalie, has been the support they’ve received from the community, their family, and friends. Remembering the tastings at Dave’s Marketplace, Nathalie describes the jitters that come with serving people the product for the first time, “But then they taste it and their faces light up and they’re like ‘this is delicious,’” she explains, “It’s a really personal moment.”

As of now, Alan and Nathalie are hoping to focus on popularizing chimichurri and building their brand before tackling other product lines. “We do want to deliver other premium Latin foods,” Alan says, “But we don’t want to overpromise and underdeliver,” adds Nathalie. They’re currently in the process of brainstorming — the first Mesa Fresca offspring might be a spicier version of their current chimichurri; “We would also love to start playing with cilantro and infusing other flavors,” they hint. The Alberto’s also hope to expand geographically. “Our goal is to become a household product and have premium Latin products in everyone’s fridge,” says Alan, to which Nathalie adds that they’ll be “taking over the world one teaspoon at a time.”