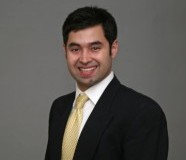 Hamzah received his undergraduate degree from the University of Nottingham in 2006, a Masters from King’s College London in 2008, and his PRIME Masters from Brown University in 2009. Hamzah co-founded Accelereach, an angel-funded developer of health and wellness coaching software, with fellow PRIME alum Adam Emrich in 2009.  The company’s software has helped thousands of people around the country lead healthier and more fulfilled lives. Hamzah joined the Rhode Island Health Insurance Exchange as a Consultant soon after it’s establishment. While there, he developed new lines of business, growth strategies, and sources of revenue. In 2011, Hamzah was honored by the Rhode Island Tech Collective as one the top 10 IT entrepreneurs in the State. Finally, he has advised United States Senator Sheldon Whitehouse on legislative policy governing immigration reform, economic development and funding for small businesses. As the Entrepreneur-in-Residence he mentors, coaches and advises student ventures, and facilitates the commercialization of Brown technology and IP.