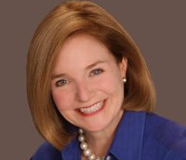 Ms. Churchville had an accomplished career as a television executive. After retiring from broadcast, she joined the Office of the General Treasurer for the State of Rhode Island as the Director of College and Retirement Savings Plans. As Director of College and Retirement Savings Plans, Ms. Churchville is responsible for managing vendors (TIAA, Ascensus, Voya, Invesco and Fidelity) who provide record keeping and asset management for CollegeBound and the state’s 529, 457, defined contribution and ABLE savings plans.

In her prior position as President and General Manager of NBC Owned Station, WJAR, Ms. Churchville was responsible for the station through a decade of turbulent and trans-formative times in media, news-gathering, technology and program distribution.