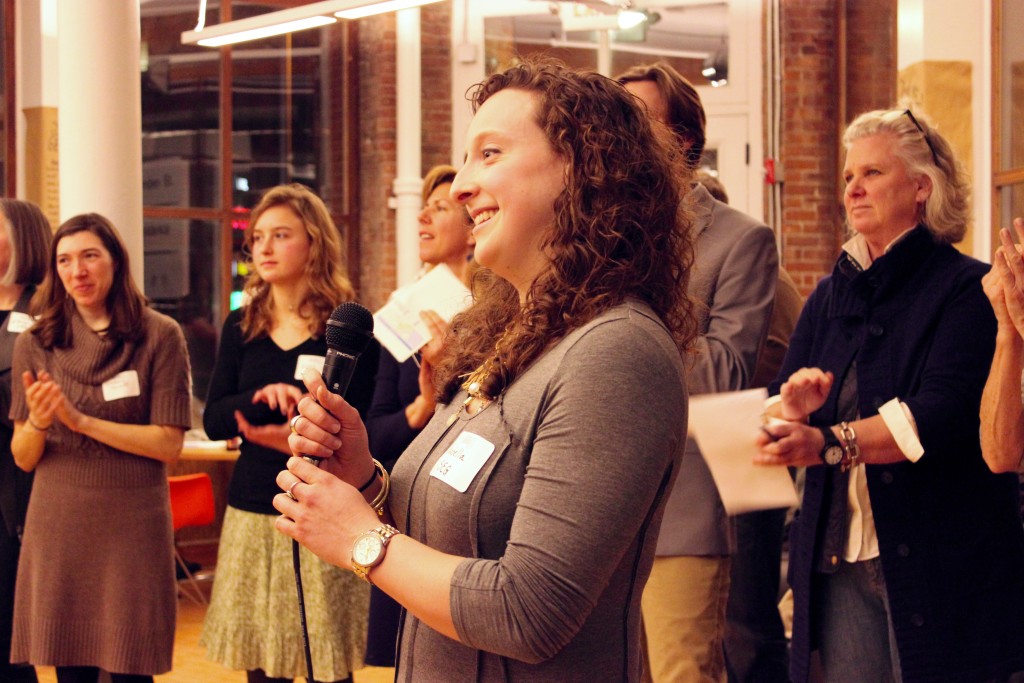 Also present at the February 9th Launch was Courtney Bourns, anior Program Officer at the Henry P. Kendall Foundation, who funded the Food Accelerator. The Kendall Foundation, whose mission is to create a locally driven food system in New England, has specifically targeted efforts in Rhode Island. Bourns pointed out that despite being the second most food insecure state in New England, Rhode Island has the ideas and leaders to gather around the cause. Explaining that Rhode Island can be an example for the wider New England area when it comes to both policy change and programs like the Accelerator, Bourns praised SEG for “using unique capacities to add value to terrific work around the state.” Up to now, food entrepreneurship has been a “critical missing piece,” she added — this is the gap the Food Accelerator is striving to close. 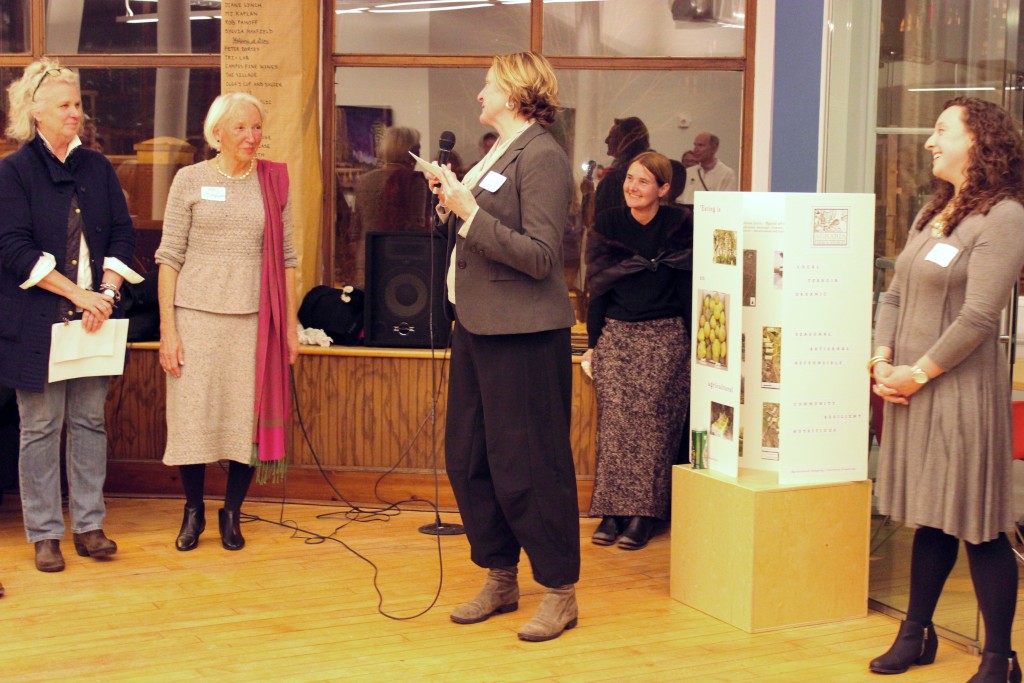 In order to close this gap, the Accelerator selected 12 ventures out of a pool of 28 applicants. The goal is to bring these mid-stage food enterprises to the next level, through a 12 week long blended learning program built on a three tenet model. Each venture participates in online modules developed in partnership with Brown University, in-person workshops with industry experts, and one-on-one coaching. The 12 ventures SEG selected for its inaugural  class range in products, services, and mission, but they all represent the variety even a small state like Rhode Island has to offer when it comes to sustainable food business.

Kathleen Bellicchi’s venture, Bellicchi’s Best Biscotti, is a biscotti company offering three flavors in small sizes so that “you get a different taste with every bite.” But the goals that Bellicchi is hoping to meet over the 12 weeks with SEG are far from bite-sized. First, she hopes to find help scaling the business appropriately so that everything is on the “right side of the balance sheet” while still maintaining her business from home. Secondly, she hopes to funnel a portion of her profits to the Alzheimer’s caretakers’ foundations in honor of her husband who suffered from the disease.

Like Bellicchi, Erika Lamb, the founder of SecondsFirst, and Mary Wise Hughes of Savory Fare both spoke about the larger social change they hope to effect through their ventures. SecondsFirst looks to “improve the efficiency of the food system” by using typically wasted foods such as imperfect vegetables and underappreciated fish to feed food insecure communities across Rhode Island. During her time with SEG, Lamb is looking to “translate relationships into sales and new markets.” Meanwhile, Hughes, a longtime caterer and personal chef, is looking to begin a business that helps feed seniors “who want to stay at home for as long as possible” but are finding it hard to cook for themselves.Hughes’ idea is still young but she’s excited to transform it into a viable business plan during her time at SEG.

Meanwhile, entrepreneurs like Barbara Link of Agraria Farm & Edibles are looking to bring heightened appreciation and “new respect” for New England’s agricultural prowess. Link, who brought mushroom jerky, honey, and mushroom pâté to the event, considers “eating an agricultural journey.” Captivated by the outdoors from a young age, Link bought her farm 15 years ago in order to “contribute a new model of small scale agriculture that provides sustainable and systemic change.” Similarly, Leah’s Recipe seeks to make healthy snack foods to encourage the idea that “healthy food can be enjoyable in the moment.” Like Link, Leah’s Recipe founder Leah Rosin-Pritchard hopes to expand values of healthy eating and spread the concept of sustainable and healthy food.

More than one entrepreneur touched on the fact that their ventures were dreams that only recently became reality. When asked what she wanted to do after graduating college, Lindsay Tarnoff of Laughing Gull Chocolates recalled that she would jokingly answer “save the world with chocolate.” Today, Tarnoff — a self proclaimed chocoholic — uses direct trade, organic, stone ground chocolate in her line of truffles. Given that she only started her venture a year ago, and then “on a whim” she’s looking to “create a brand and become a real business.” Similarly, Daniel Sheehan of The Humble Pie Company, which makes “pies with local ingredients,” is looking to the Accelerator to help him think bigger. Like Tarnoff, Sheehan is looking to build his brand so that “all of Rhode Island knows The Humble Pie Company name and that it’s pretty good.”

Like Tarnoff and Sheehan, siblings Alan and Nathalie Alberto are still pinching themselves that their food dream has become concrete reality. The Albertos started their venture, Mesa Fresca, just last July. Mesa Fresca will soon offer a variety of Hispanic products, but as of now it’s primarily focused on their mother’s homemade chimichurri recipe. The Albertos come to SEG with a hope to deliver on their commitment to “nourish through food but also community.” Meanwhile, other ventures, like Mary Weaver’s Newport Cooks, which offers affordable cooking classes to adults and children with private chefs from Newport, have been around longer. Weaver started Newport Cooks 7 years ago, but until now there had never been a program like the Food Accelerator to help her go that one step further — “diversify, build strategy, and have more social impact.”

Entrepreneurs like Ziggy Goldfarb, Fox Point Pickling Company’s Head Pickleteer (pronounced pickle-a-teer), and Jeffrey Powell of Ocean State Smoked Fish Company are looking for help in transitioning from businesses that were once a part-time commitment but have quickly become full-time jobs. As Goldfarb explains, Fox Point Pickling Company went from “dream to reality to full time job” only one year ago, and he “knows [his venture] is big but not big enough.” Similarly, Powell is looking to make his smoked fish company investor ready and make the jump into managing his company full time.

Although Jonah Rapino of Boston-based Glenwood Garden could not attend the Launch, he is excited about partnering with the other food ventures in the cohort. Glenwood Garden is an e-market for sustainably made food and shopping for a cause. This unique model helps to support artisan food makers, while also helping food-focused non-profits gain a recurring source of revenue. By working with the rest of the cohort, Jonah will receive direct feedback from producers, enabling him to bring his venture to the next level.

As the entrepreneurs wrapped up their talks, the audience quickly gathered back around the tables that highlighted the food products the Accelerator is helping bring from concept to plate. Although the program is still young, signs of innovation were everywhere. Powell and Sheehan had partnered for the event to make humble pies with smoked fish from Powell’s fish company, and elsewhere attendees could be seen mixing and matching ingredients on their own. The entrepreneurs graduate the program May 10, and there’s no question that this innovation will continue, bringing both positive social and economic impact to our state and region’s food economy. 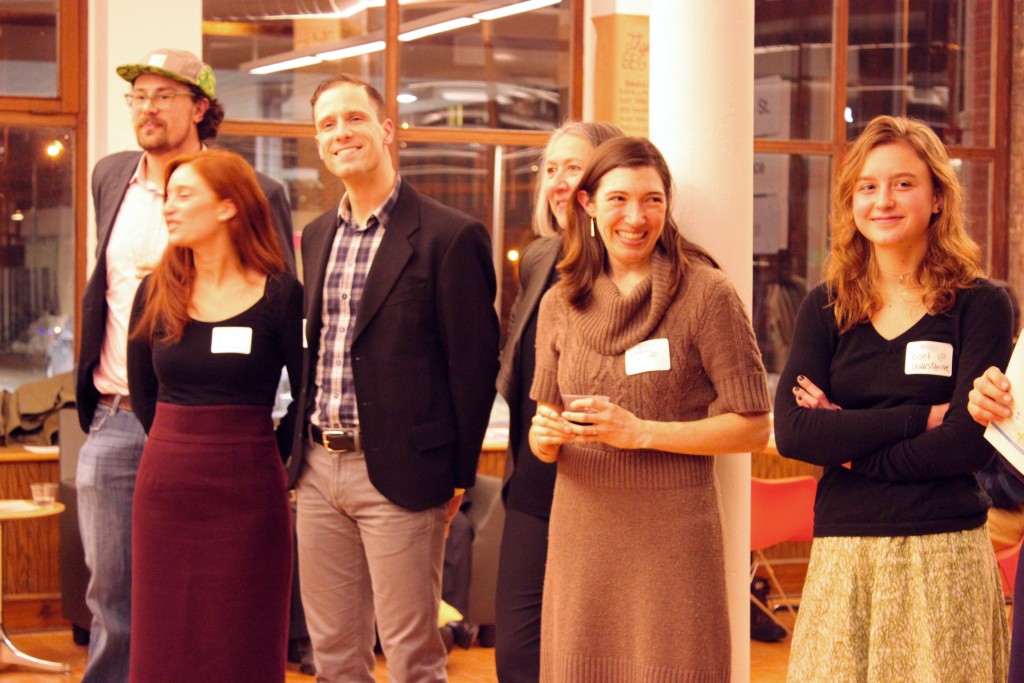