How Texting can Help the Homeless
By: Jessica Kaufman
July 22, 2015

In the United States on a single night in January, 578,424 people experienced homelessness. Some stayed in shelters while others slept outside. Those who stayed outside did so for a number of reasons. Some of them just didn’t know where to stay, or where vacant beds were available that night. A lack of access to information like this is the most prevalent and pervasive barrier between the homeless and homeless services.

Eric Bai is a recent Brown University graduate trying to solve this problem with TextUp, a phone-based texting service that connects the homeless with social service agencies. Eric and fellow peers launched TextUp through Brown University’s Social Innovation Initiative in ­2013 and are working hard to grow and launch the company in Providence. Eric was a 2014-2015 Social Innovation Fellow through the Swearer Center at Brown University. Rhode Island has the second highest poverty rate in New England and an estimated 4,868 homeless people. Social service agencies in the state currently lack an effective information infrastructure to reach this population.

The idea for TextUp came after Eric interned at a mobile tech startup called FrontlineSMS in Kenya. FrontlineSMS lowers barriers to positive social change using mobile technology. Their SMS platform has been used by Search For a Common Ground in Nigeria to create reliable reports on peace and violence that are sent by mass text alert messages to the community. Co-founder of TextUp and fellow Brown student Amanda Chew interned down the hall at Ushahidi, a global non-profit technology company that empowers people to make an impact with open source technologies. Amanda graduated from Brown in 2014 with a degree in Math and Computer Science and is currently working in Singapore for Microsoft and serving in an advisory role for TextUp.

Eric was inspired by the way texting was used to engage communities differently, he explains: “Technology adapts to whatever pressure society puts on it. Here [in the United States], the thing people tend to be interested in is how to use technology as a tool for leisure or business, so the pressure is faster, better, more intuitive. Whereas in other countries, resource constraints may be more of a problem, and so a different host of approaches has evolved because of that.” 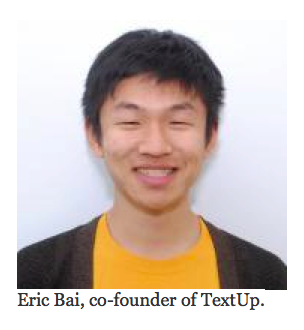 In the past two years, two of the biggest cell phone providers, which comprise 90% of free government issued phones, have switched to unlimited texting. An estimated 50,000 clients of social services in Rhode Island have text enabled cell phones and could  use TextUp to keep up-to-date with availability of basic services. For social service providers,  TextUp has a mobile-optimized web interface allowing providers to send out mass texts to people who are homeless at large or targeted groups of clients. For clients, it’s a text-enabled phone number that allows them to receive text alerts and communicate with providers. The social venture is currently on version two of their prototype and is fiscally sponsored by the House of Hope, one of the largest housing case management and shelter providers based in Warwick, Rhode Island.

Over the past few months, TextUp has interviewed  nearly 200  clients, case managers, and staff at  social service agencies in a rigorous process of customer discovery and rapid prototyping. This suggestion came from Julius Searight, a fellow Social Enterprise Greenhouse Accelerator graduate and founder of Food4Good. As Julius told Eric, “You just have to get out there and talk to the people you’re trying to serve to figure out what they need. You need to build a product around the needs of the community.”

Finding out how to best serve clients created purpose and opportunity for TextUp. Eric explains, “The openness people have exhibited, the bluntness they are brave enough to share with us, it keeps us going, because when you see someone tell a story that you can see [TextUp] working in, it’s illuminating.”

Eric has developed new features to TextUp from his interviews with the community. For example, he learned from supportive housing facilities that it takes six months to a year for someone who moves into the house to settle and trust staff because they are used to always being in crisis mode and a constant state of stress. TextUp could alleviate that constant crisis containment mode by providing simple communication tools for staff at supportive housing programs to diagnose and intervene before problems spiral out of control. As a student Eric says it is gratifying “to go to a primary source, see a problem, and then exist in a feedback loop where you can immediately think of a potential solution, and build something that might help.”

Social Enterprise Greenhouse has enabled Eric to develop an impact mindset. Now, when he makes decisions for TextUp, he does it with community input and overall impact in mind. By being a part of the Accelerator, his view on being a social venture began to change.  He says, “Before I was like ‘oh it’s a project I’m working on’, but now it’s like this is an initiative, a tool, a company, and thinking that way makes you subconsciously approach things strategically and with more urgency. Being in an environment that encourages that mindset is one of the most valuable things we found here.” 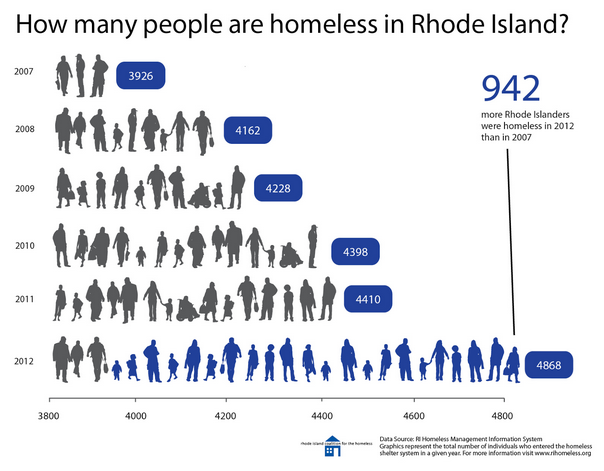 Providence as a city has also provided Eric with the ability to gain legitimacy and get his bearings. Eric calls Providence, “a scrappy underdog” that creates an atmosphere where people are more receptive than other bigger cities to hearing you out, and “that’s really a gift.”

For a kid from Los Angeles, Providence wasn’t the most obvious choice for settling to launch a business after college. Social Enterprise Greenhouse, Brown, and the larger Providence ecosystem, however, proved to be great place to grow a social venture. As Eric says, “I really never in a million years thought I would be doing something like this, or I guess it’s something I have always been scared of, so being able to create my own structure and direction, it’s just… it’s really cool what time will bring.” In the future Eric hopes to be more established in both Providence and Boston to show what texting and focused communication can do for improving the experience of  seeking and receiving help.

Read more about Eric on Swearer Sparks, here. If you’d like to get in touch with TextUp, email connect@textup.co.